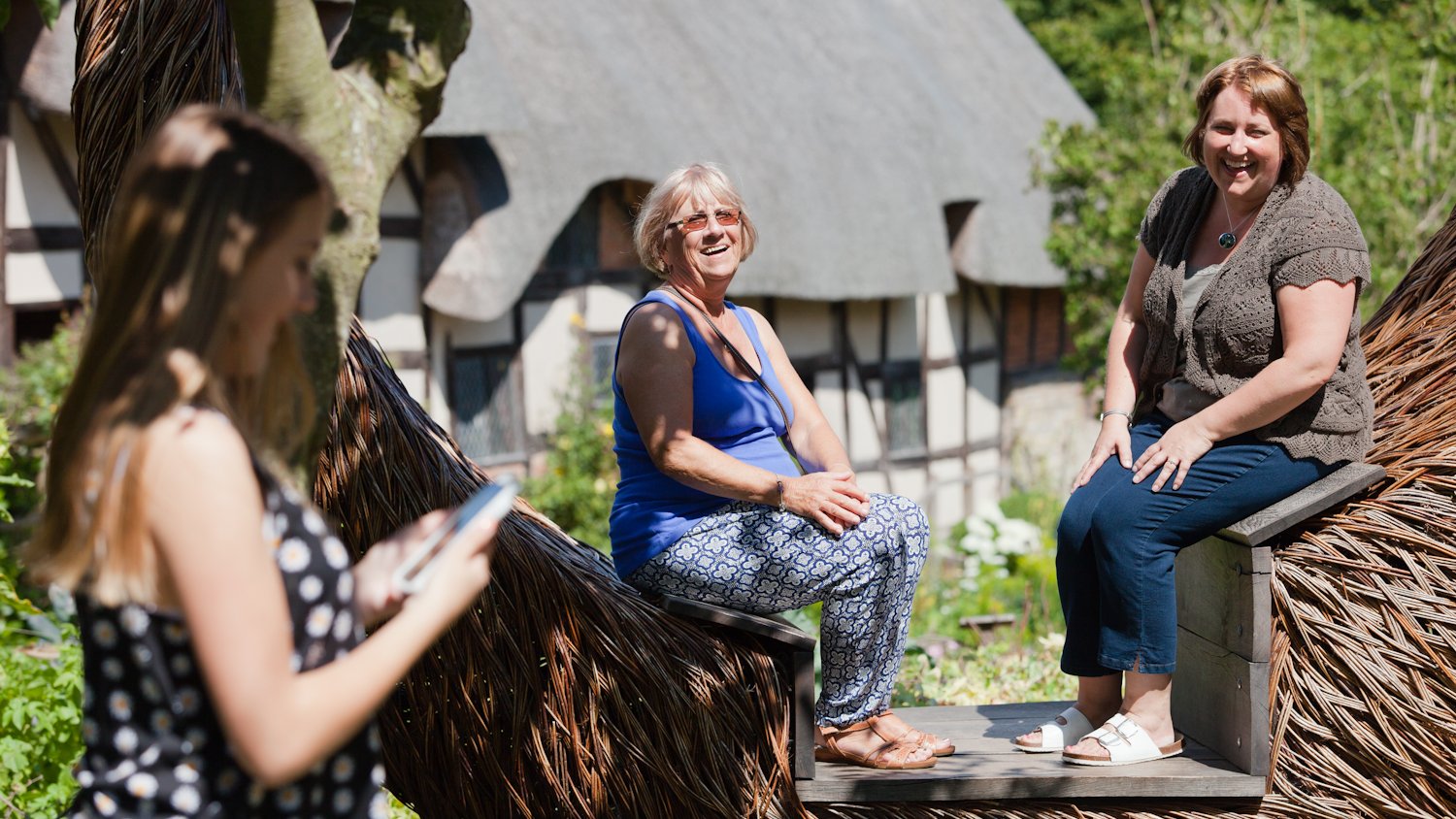 A girl is taking a photograph with her mobile phone of two older ladies sitting in the willow sculpture in front of Anne Hathaway's Cottage. The sun is shining, and all are smiling. 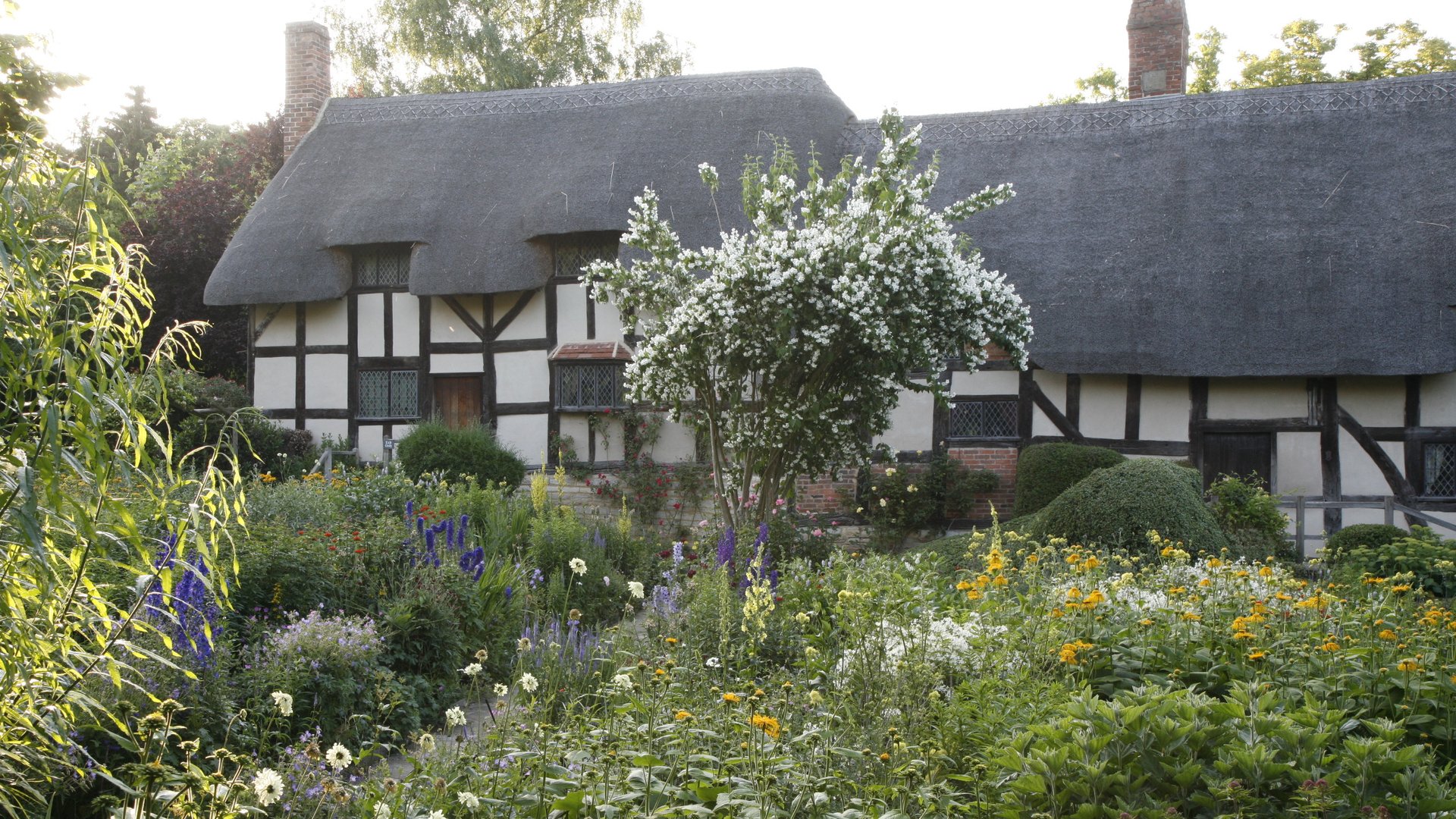 Traditional cottage garden shrbs and flowers -- largely white -- including one central tall flowering shrub, with the timber-framed thatched Cottage in the background..e 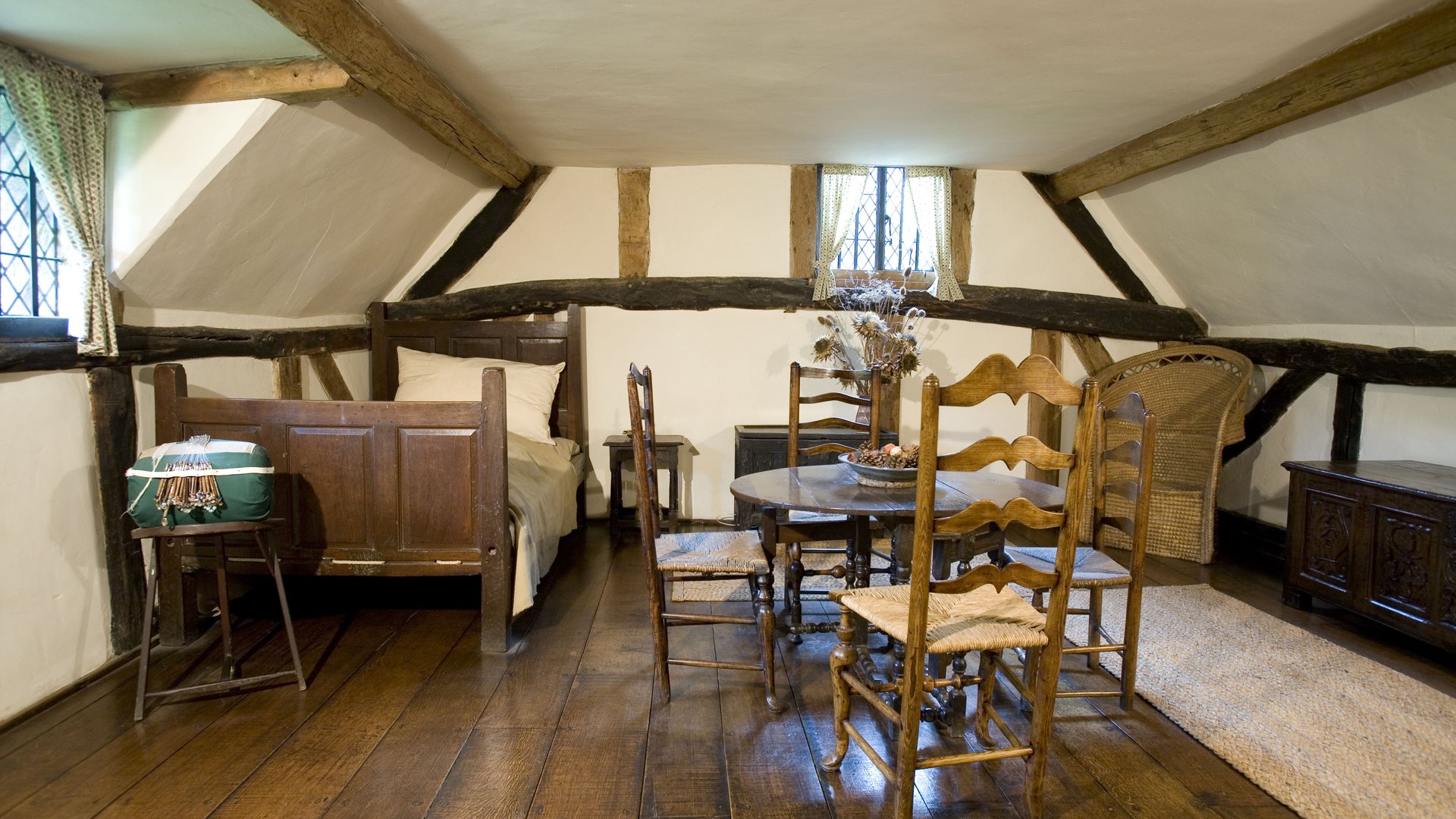 An attic room with a dormer window. In the room are a round wooden table with four wooden chairs with wicker seats, a wicker armchair in the corner, and by the left-hand wall a wooden bed There are also two chest and, a small bedside table. 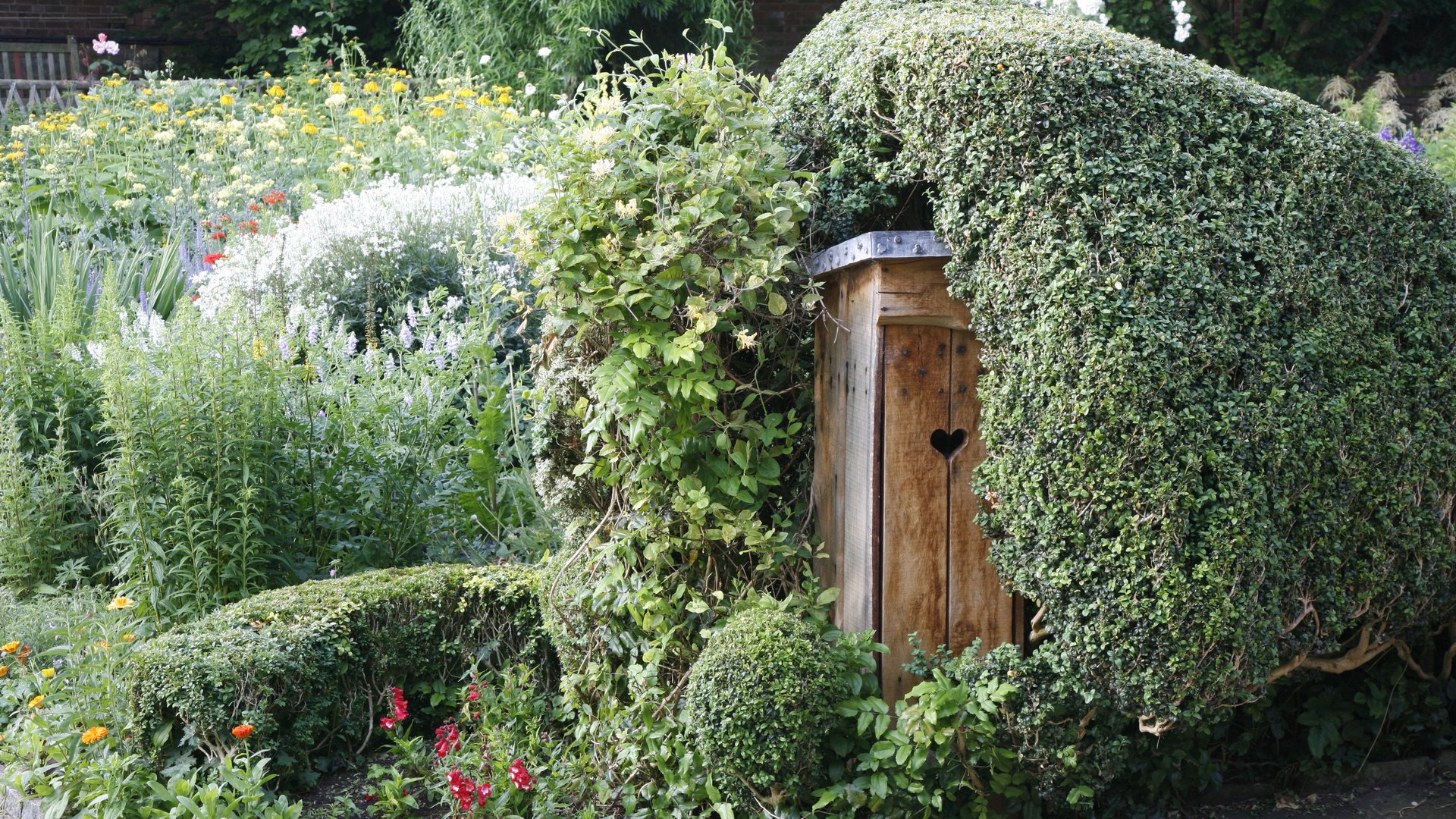 The garden, with tall flowering shrubs and trimmed hedges. Half-hidden by one large hedge is the privy, with a wooden door, sides and roof. 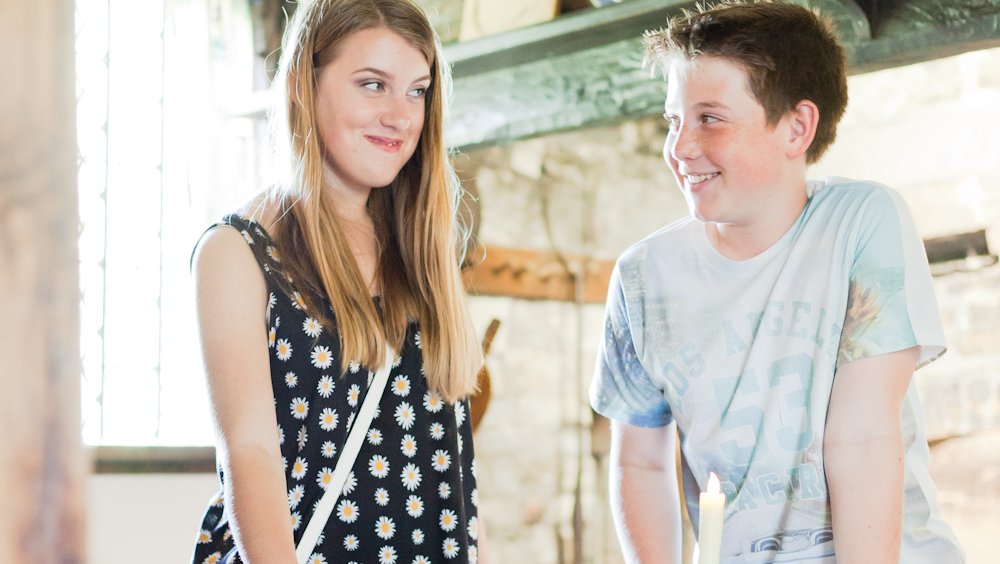 A young man and a young woman stand by a highly-polished wooden table, on which there is a board game -- although they are looking at each other, not the game. In the background are a window and a shelf with three willow-pattern plates. 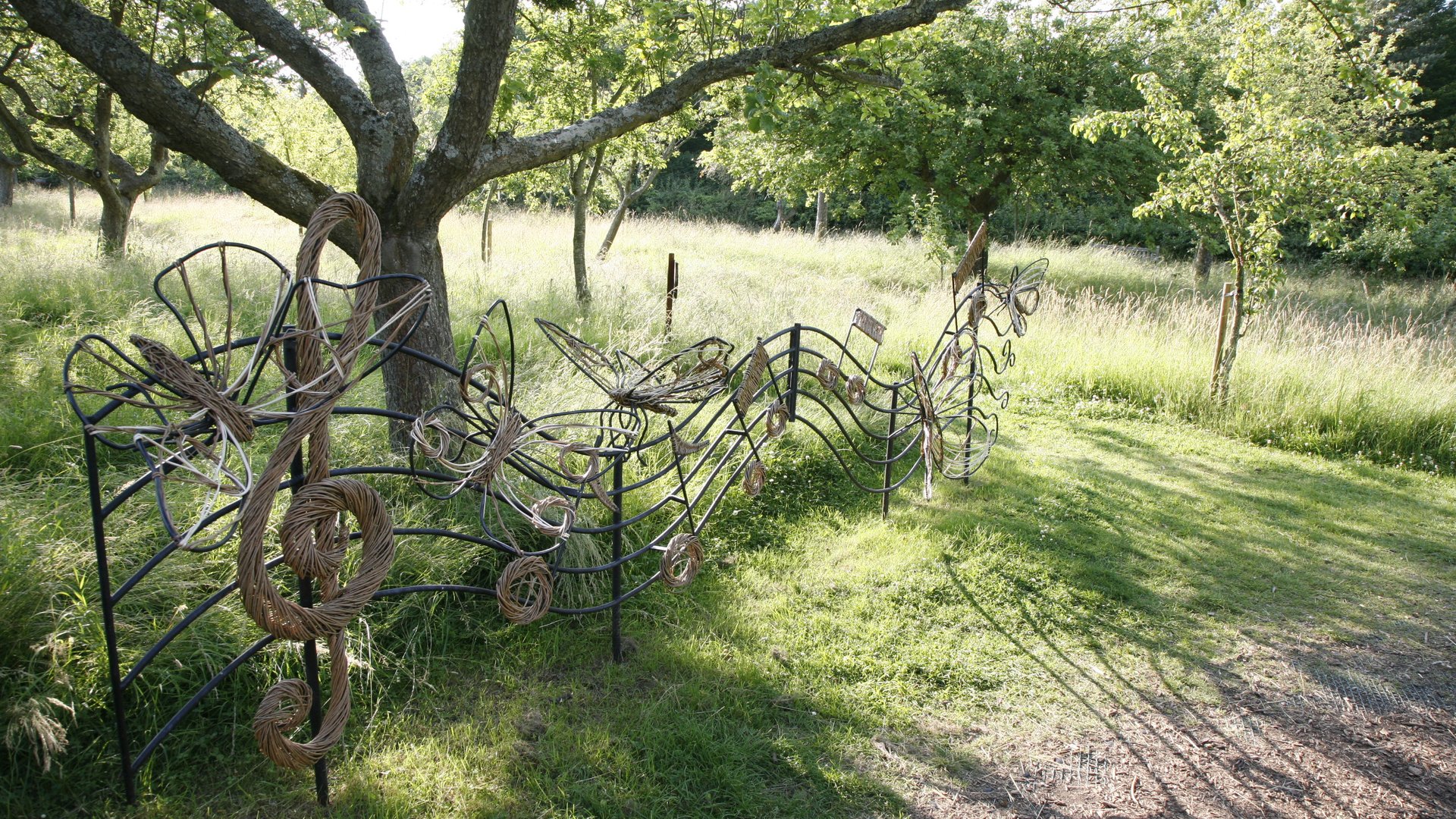 A metal musical stave runs in a wave away from the viewer. On it are metal butterflies and musical notes, with a treble clef at the beginning. Behind are the trees of an orchard standing in long grass, with a mown path beside the sculpture.

Visit Anne Hathaway's Cottage, the family home of Anne Hathaway, William Shakespeare’s wife-to-be. It is here that Anne was born and raised and where the young Shakespeare would have visited her during the early part of their relationship. Built more than 500 years ago and extended over the years, much of the original survives. See original furniture including the Hathaway bed and uncover five centuries of stories of the family who lived here for 13 generations. Wander through acres of beautiful cottage gardens and orchards, and explore the sculpture trail inspired by Shakespeare’s plays. Continue reading...

Anne Hathaway’s Cottage was originally a farmhouse. It was built in 1463 and comprised only three rooms, two of which survive - the kitchen and the parlour. The first Hathaway to live in the cottage was Anne’s grandfather John Hathaway, who was a tenant sheep farmer. Anne, later Shakespeare’s wife, was born in the cottage in 1556.

When the site was a farm it was known as ‘Hewlands’ and the Hathaway family were successful sheep farmers. The garden was a farmyard with some livestock and space for growing herbs and vegetables.

Anne’s father died in 1581 and Anne’s brother Bartholomew inherited the tenancy of the 90-acre farm and he later bought the freehold. He then added an extension, increasing the size of the cottage and inserted new chimneys and an upper floor at the same time. This work was completed before Bartholomew’s death in 1624.

By the late 1800s, the family’s fortunes had declined. Some property including land and other houses were mortgaged, and eventually sold. In 1838 the cottage itself was sold, but the Hathaway family continued to live in the cottage as tenants.

One of the last Hathaways to live in the cottage was Mary Baker. When the Shakespeare Birthplace Trust purchased the cottage in 1892, Mary and her family were paid the large wage of £75 per year. Their duties were to share family stories and to care for the cottage, both of which we continue to do today. Her son William Baker occupied part of the cottage until he left in 1911.

How Green was Shakespeare?

What might we learn from our Tudor ancestors about becoming greener and cleaner, and how did Elizabethan and Jacobean innovations in daily living shape the future?

OUTing the Past Festival 2022

Celebrating the past, preserving the present and looking towards the future