Today, Polish people around the world will be celebrating Constitution Day, which commemorates the adoption by the Polish Parliament of the Constitution of 3 May 1791. To mark the occasion, Annette Ormańczyk explores some of the fascinating links between Shakespeare and Polish history, and related material held by the Shakespeare Birthplace Trust Library.

The Constitution of 3rd May 1791 was quite groundbreaking. Born out of attempts by a section of the Polish elite to strengthen the state and defend the Polish-Lithuanian Commonwealth from the territorial encroachments of Russia, Prussia and Austria since 1772, it introduced bold reforms. Embracing Enlightenment ideals, a constitutional monarchy was established, the power of the gentry was curbed, the peasants were recognised as part of the nation and freedom of religion was guaranteed. Predating the French Constitution by a few months, it aroused much contemporary international interest, and it is considered to have been the first modern national constitution in Europe. Needless to say, it served neither the interests of the conservative magnates nor Poland’s influential neighbours. The Second Partition of Poland took place in 1793 and two years later, Poland disappeared from the map of Europe altogether, for nearly 150 years. 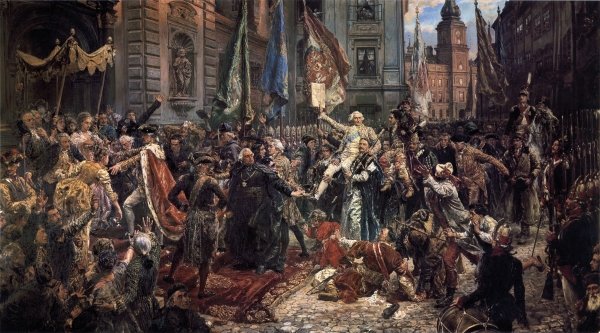 The connection between Shakespeare and Poland long preceded these troubled times. Shakespeare was first performed in Poland in the early 1600s, in English, in northern towns such as Gdańsk where an English-speaking émigré community had settled during the Middle Ages for economic and religious reasons.  Nationwide interest in Shakespeare grew in the 1700s. King Stanisław August Poniatowski was himself a great admirer of Shakespeare, and translated fragments of Julius Caesar from English to French. Princess Isabella Czartoryska (1746-1835), founder of the first Polish museum and an avid collector of Shakespeariana, was so captivated by the work of the bard that she learned English to read the plays in his native tongue. Polish language productions at this time were adaptations of German or French versions, which largely conformed to dominant pseudo-classical tastes. Despite this, they established the presence of Shakespeare on Polish stages.

It was in trying times, however, that a special relationship between Shakespeare and Poland really seemed to emerge. Wojciech Bogusławski’s Polish language production of Hamlet can be seen as an example of what has been recognised as a Polish ‘appropriation’ of Shakespeare for political purposes. The first Polish staging coincided with the defeat of Kościuszko’s Uprising in 1794 and the Third Partition of Poland. Perhaps it was in order to remind Poles that their allegiances should lie with a Polish nation and monarch that in this production Hamlet’s servants begged their rightful ruler to forgive their disloyalty.

During the years of foreign domination, the occupying powers adopted oppressive policies to erode Polish cultural identity, particularly in the Russian sector of partitioned Poland. The imprisonment, deportation and murder of dissidents were common. Following the unsuccessful November Uprising of 1830-1 in that sector, Shakespeare was banned from the stage for decades due to the frequent references to dissent and anti-government conspiracy in his plays. The great Polish Romantic poets such as Adam Mickiewicz and Juliusz Słowacki revered Shakespeare- Mickiewicz even tried his hand at translating Romeo and Juliet. Their writing was also steeped in their yearning for Polish sovereignty. As such, Romantic works were subject to strict censorship, but in performances of Shakespeare’s plays- which proliferated by the later 1800s- audiences could find ‘hidden’ references to power, cruelty and justice, and apply them to their own situations. Shakespeare had, again, become political.

The Polish Romantic poet, Maurycy Mochnacki, petitioned for Polish playwrights and poets to look past foreign language adaptations to Shakespeare’s work in its original form. Ira Aldridge’s visits to Poland between 1853 and 1867 also generated interest in preparing a Polish translation from the original. The Reverend Ignacy Hołowinski was the first to attempt the task, and translated ten plays between 1839 and 1841. His successors are largely considered to have been more successful, and the translations of Józef Paszkowski, Stanisław Koźmian and Leon Urlich, edited by the well-known Polish writer Józef Ignacy Kraszewski, were published in 1875 as Dzieła Dramatyczne Williama Shakespeare- the first collected works of Shakespeare in the Polish language.

All three men were themselves touched by the Polish political situation; Koźmian and Urlich escaped to England after the November Uprising and both were active in émigré circles. Although apparently only Koźmian had an advanced knowledge of the English language, these translations achieved the status of ‘classics’, and their texts became recognised by countless generations of Poles. 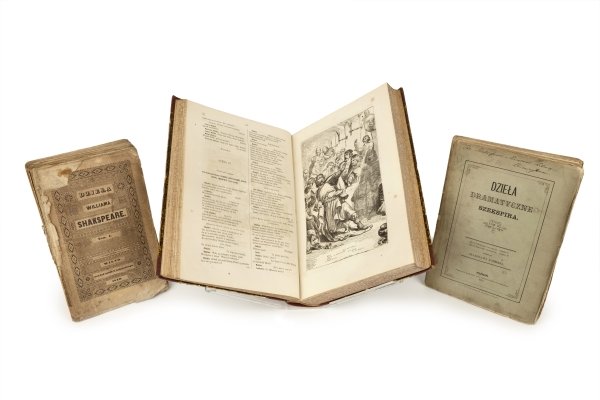 The implications of the Treaty of Versailles for national self-determination in Europe meant that Poland became re-established as an independent state after World War I. Barely twenty years later, however, it was once again partitioned by its neighbours, and remained in the Russian sphere of influence following the end of the Second World War. The Communist authorities’ approach to Shakespeare changed over time. As a representative of an imperialist culture, the staging of some of his plays was forbidden.  Later, official propaganda portrayed him as a class-conscious playwright. Censorship was re-established; in fact, the 3rd May celebrations themselves were officially banned by the Communist authorities between 1946 and 1990. Again, however, staging allowed productions to become vehicles for the promotion of subversive messages and ideas. Violence, martial law, political despotism and bureaucracy were the targets of criticism in Shakespeare’s plays staged by eminent directors such as Andrzej Wajda. The second half of the twentieth century also bore witness to the emergence of new translations into Polish, while Jan Kott’s collection of essays achieved international acclaim and influenced the work of directors around the world, including Peter Brook’s 1970 production of A Midsummer Night’s Dream.

As Poles celebrate Constitution Day today, Shakespeare remains as prolific as ever in Polish theatres and educational institutions. Times are conversely less troubled, yet his enduring popularity remains. In his role as Director of the Gdańsk Shakespearian Theatre, Professor Jerzy Limon remarked that: ‘Shakespeare always reminds us how much we have in common, because the language he uses and the problems he describes are universal’.