The 24th of April is Armenian Genocide Memorial Day. It is a national holiday in Armenia and commemorated annually by Armenians around the world. To mark this important day in the Armenian calendar, I would like to introduce our readers to an Armenian translation of The Merchant of Venice held in the Shakespeare Birthplace Trust library.

One of the most enjoyable aspects of being a librarian is succeeding in finding the right book for the right reader. This was definitely the case when I showed my colleague Anais Vanian-Cooper, Manager at Hall’s Croft, one of our Armenian translations of The Merchant of Venice. Excitement was dancing in her eyes and she looked very happy.  It turned out that the book had a connection with Anais's family.

A group of Armenian monks (the Mekhitarist) living in Vienna and running their own printing press printed the book that I showed to Anais. The translation is by Hovhannes Khan Massehian, a distinguished diplomat, ambassador and linguist who was fluent in nine languages. Anais’s cousin Hayr Hovsep, also a Mekhitarist monk, lives on the island of San Lazzaro in Venice where they have the finest Armenian rare book library in Italy. The monks in Italy also operated their own printing press and published works in thirty six languages. According to Anais, her cousin is now ninety three but still going strong. I am sure he will be delighted to see Anais’s photographs of the Armenian Merchant of Venice printed by his Mekhitarist brothers.

Researching the library on the island of San Lazzaro degli on the internet made my rare book librarian’s heart beat fast with excitement. Built in 1740 this library holds 150,000 books rare books and manuscripts; many distinguished people visited it including Lord Byron who stayed there to learn Armenian. Surrounded by gardens, the monumental library with its pear wood shelves looks stunning. Having been to Venice before, I regret not to have discovered this gem of a place but next time I am in Venice, I shall make sure to visit this extraordinary collection of treasures. 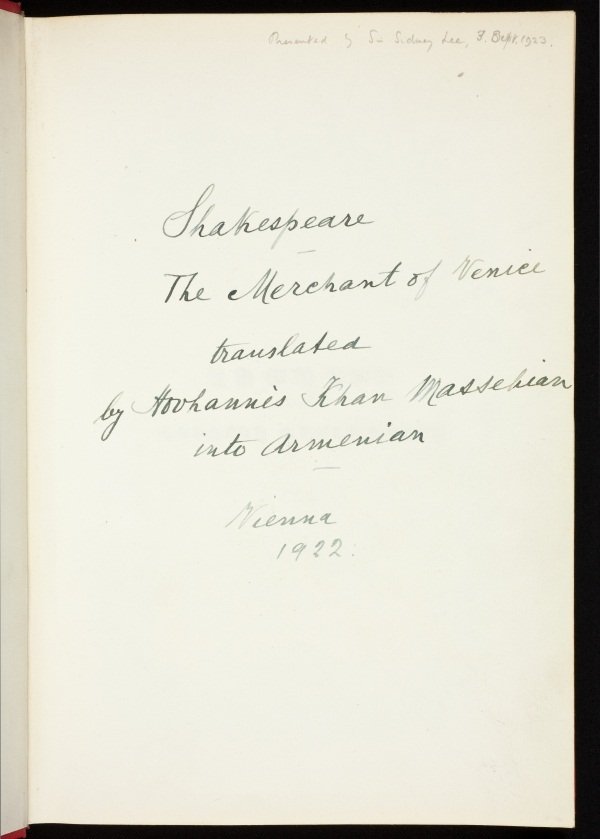