A Victorian replica of Shakespeare’s Birthplace

In 1847, Royal Surrey Zoological Gardens built a replica Birthplace as an attraction for visitors.

Known as ‘an Englishman’s Paradise’ (Punch, July-Dec 1841) the 15-acre Royal Surrey Zoological Gardens were a vast area of green parkland ornamented by fountains and lakes, ‘picturesque beyond description’, according to Bell’s magazine. It was, in essence, an entertainment arena. For a modest fee visitors would be admitted to the gardens and be able to partake of refreshments supplied by a waiter or a picnic, visit the exotic animals kept under the domed roof and marvel at the birds that lived on the island at the centre of the largest lake. At their peak, visitors could number in their thousands. Spectacle was key: dioramas, panoramas, balloon rides, boat trips and dramatic re-enactments such as the eruption of Mount Vesuvius. Apart from these, much of the entertainment was provided by concerts which took place at dusk and at the end of which there were fireworks (Bell’s, 30 May, 1847, p. 2a). 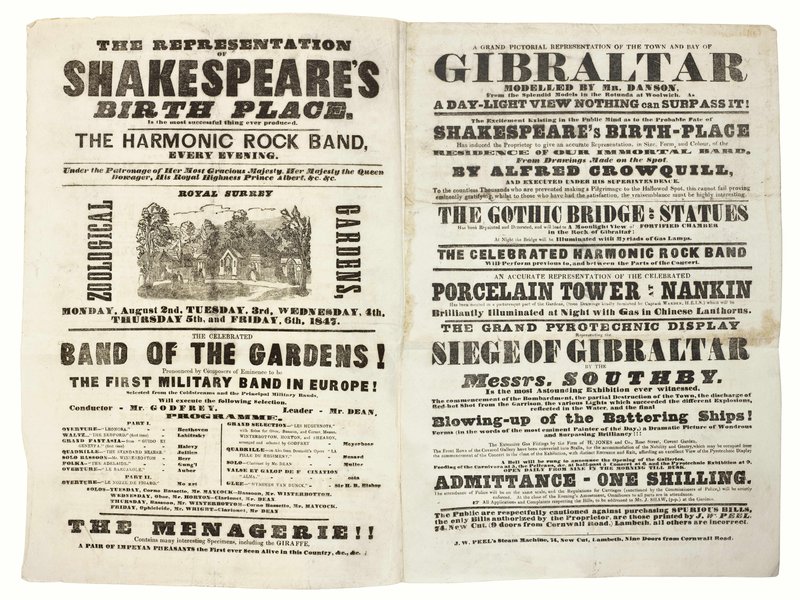 Naturally, such an establishment at the heart of the London metropolitan area was not to be outdone by events happening in a provincial town in the Midlands. With the announcement that Shakespeare’s Birthplace was going to be up for public auction, The Times reported on the ‘perfect facsimile representation’ open to visitors in the Gardens in July 1847. The detail of the replica Birthplace was astonishing. It was, according to the article in the paper, no mere ‘scenic representation’ or ‘box of boards’ standing there for show, but ‘an actual house built by measurement on the plan and of the dimensions of the house of the poet.’ Such detail had been achieved, according to the London Standard, by ‘a special survey of the original’ and the finished piece had even been ‘coloured’ to represent the building in ‘its natural antiquity and decay.’

The authenticity of the reproduction did not end there. Some people had helped furnish the house by loaning out items of furniture of the relevant period. A ‘damsel in Elizabethan costume’ occupied the butcher’s shop part of the building; although the reconstruction only went so far. She did not act as a guide such as we see in the Birthplace today, to inform and entertain the visitors with stories of Shakespeare’s life and times. Her job was to sell copies of prints of the building by ‘Alfred Crowquill’ (Alfred Henry Forrester, 1804-1872).

What happened to the replica Birthplace is as yet undiscovered, despite the spoof campaign by Punch to save it for the nation; but given that the Gardens were a place that needed the income of the visitors to survive, it also needed to continuously renew its attractions to tempt people to return. The replica exploited the national interest in the sale of the original and I suspect that, once the novelty had worn off, the building was simply quietly dismantled. In any case, the Gardens themselves started to lose their appeal. Sadly, the Great Exhibition of 1851 proved too much competition and, despite attempts to revive it, even selling off the animals to build a music hall, the numbers diminished to such an extent that the land was sold off to developers in 1878. What remains of the green space in Southwark is known as Pasley Park.

A new range of souvenirs  and images  relating to the auctioning of the Birthplace are also available from our shop.

Thomas, Julia. 2012. Shakespeare’s Shrine: the Bard’s Birthplace and the Invention of Stratford-upon-Avon. Philadelphia: U of Pennsylvania Press.